Best flared jeans for women: where to shop and how to wear the 2022 trend

How to make classic S’mores 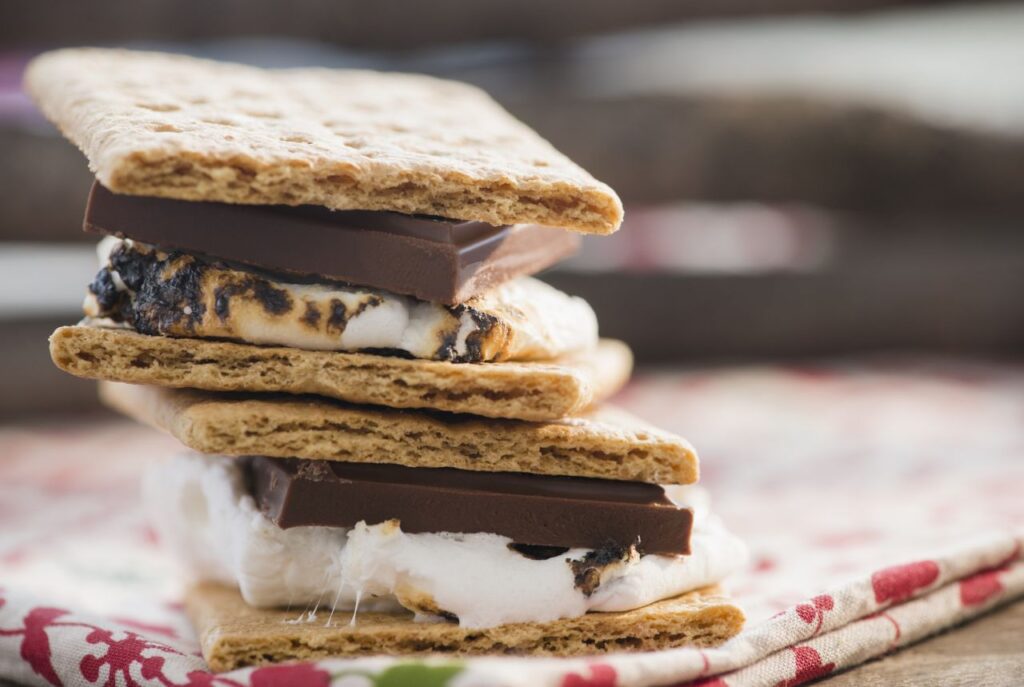 Wondering how to make S’mores? Our simple guide will show you how…

They’re the ultimate American treat, synonymous with campfires, barbeques, boy scouts and girl scouts alike. S’mores are gooey sweet sandwiches from across the pond make the perfect Bonfire Night treat, and are the work of mere moments!

You’ve probably seen them in the movies, or on TV, but have you ever wondered what they’re made of? Or why they’re called s’mores? And if, like us, all you want to do is bite into these squishy, chocolatey campfire confections, here’s everything you need to know.

Essentially, a S’more (a portmanteau word, combining the words ‘some more’ together) is made up of just three ingredients: Graham crackers (or biscuits) marshmallows and chocolate – and they’re super easy to make yourself.

They originated in the States, and though the origin of the creator is unknown, the first published recipe was found in the early 1920’s, where they’re simply called ‘Graham Cracker Sandwiches’. They later appeared in a publication called Tramping and Trailing with the Girl Scouts, where they were then referred to as ‘some more’. It wasn’t until a decade later when they were shortened to the popular term S’mores.

How to make S’mores

In the US and Canada, S’mores are commonly made with Graham Crackers; a sweet, rectangular whole wheat biscuit that snaps into two squares – making them the ideal vessel for transporting marshmallows and chocolate to your mouth.

In the UK, the closest thing we have to a Graham cracker is the humble digestive biscuit. They taste just as good (if not better) and the best thing with a digestive biscuit is that they can come already loaded with chocolate, and even caramel, if you want to get really fancy!

There are a variety of ways to make S’mores, you can keep it classic as a Bonfire Night treat, or bring them into the 21st Century by cooking in the microwave, here’s how…

How to make S’mores on a campfire

If you happen to be by an open flame, make sure you have a bag of marshmallows and a couple of sticks handy…

How to make S’mores on the BBQ

Similarly to a campfire, you can toast your marshmallows over the grill, and what a great way to end a BBQ, aye? As we would advise with any type of BBQ cooking, we would only recommend natural fires, and avoid using lighter fluid, as this can permeate the food and ruin the taste, and that’s what it’s all about, really.

*You can also opt for other biscuits or cookies, ones already coated in chocolate, or even use a chocolate spread like Nutella, perhaps? Yum!

How to make S’mores in the oven

If you’ve got a hankering for gooey s’mores, but lighting a campfire seems a little excessive, fear not – you can also achieve a similar result in the oven! They’re great for feeding the masses, and would be a hit at a children’s party.

How to make S’mores in the microwave

We know what you’re thinking. In the microwave, really? But you absolutely can! For those times when you need a s’more fix in an instant, or you just want a little solitary treat to yourself, just pop into the kitchen and turn on the microwave.

*If you don’t want the chocolate to melt, you can add this after.

You can even make s’mores around the dining table or from the comfort of your living room with these adorable Homemade S’mores Kits. They’re perfect for date night, and will make great stocking fillers for Christmas.

If now all you can think about is biscuits filled with pillowy marshmallow and melted chocolate, take a look at some of our favourite s’mores recipes:

S’mores 2.0! These s’mores have had a serious upgrade by switching out the digestives and opting for spiced ginger biscuits. These have then been paired with sweet bananas and a deliciously moreish hazelnut caramel.

Get the recipe: S’mores cookies with ginger and caramel

You don’t have to stick to biscuits or cookies either, you can think out of the s’mores box and try something new, like these chewy caramel stroopwaffles. Paired with bananas, salted caramel and Lotus biscuit spread, these s’mores evoke the nostalgia of a Banoffee pie.

Get the recipe: Banana waffle s’mores

If you can put a marshmallow on it, you can turn it into a s’more! We’ve given these cupcakes a little campfire makeover by including a crunchy biscuit base, melted chocolate, a gooey rich chocolate sponge and a sweet, fluffy marshmallow topping!

Get the recipe: S’mores Cupcakes

There’s nothing better than a chocolate brownie we hear you say? We think you’ll take that back once you’ve tried our ooey-gooey fudgy s’more brownies! Why not push the boat out and serve with ice cream for a sweet finish, great for then you’re entertaining. Store these brownies in an airtight container and eat within two days for the best flavour.

Get the recipe: S’mores Brownies

Try them out for yourself and see what’s your favourite!

How to cook broad beans

How to cook jackfruit

How to sterilise jars and bottles

How to cook turkey crown

How to make sausage rolls

The 7 most expensive household items to leave on standby

Why do you need the services of a recruitment agency when looking to find a job in Germany?